Split screen multitasking is one feature i have come to love on Android. Precisely Android phones running Android Nougat OS. Infinix mobility officially announced Android 7.0 Nougat a couple of months back. The infinix Note 3, Note 3 pro, infinix Zero 4 amidst others, officially got the nougat OS flavor.

Alongside the memo on the new OS update, split screen was mentioned as being part of the package.

Now, while split screen multitasking can be essentially useful, quite a lot of infinix Android phone users do not know how to utilize the split screen feature. A lot probably do not even know about the feature.

For the records, the split screen feature isn’t exclusive to infinix or tecno android phones running Android Nougat OS. The feature is basically embedded in the Nougat OS, not by OEMs.

Hence, if you have an Android phone running Android 7.0 Nougat, you should try out the split screen feature on your device. It sure brings about a better experience.

Latest Infinix android phones have Android 7.0 nougat running under the hood. Likes of the infinix smart and the infinix note 4 both run Android Nougat and the split screen multitasking feature is in place (tested and confirmed on the Note 4).

For those who do not know, below is what the split screen mode on Android phones look like:

Basically, the screen is divided into two, thus giving you the ability to use two apps simultaneously. You can be watching a movie and at the same time, be checking out a new email. Think about being able to easily copy texts from one page to another.

Seem really interesting, yeah? Let’s get on to the main subject matter.

First thing first, the device needs to be running Android nougat. It won’t run on lower android operating systems. Although there are ways you can incorporate same on lower operating systems, they most often at times, require root.

In the case of Android 7 nougat being able to perform split screen multitasking, root is not required.

#Step 1: Open the first app you’d like to use on split screen.

#Step 2: Tap on the menu / options button, tap and hold on the app and move it to the option that displays ‘Drag here to use split screen‘.

At this point, you’d notice the app is now shortened – basically to the middle.

#Step 3: What you want to do at this point, is include a second app in the split screen. To do this, simply launch any other app and it  will automatically appear beneath the first app.

Now, you should have two apps on the screen running simultaneously.

Few Points To Note Regarding Split Screen Multitasking on Android

Being able to split screen isn’t limited to portrait mode. Turning the display to landscape still keeps the split screen in its expected form. As a matter of fact, landscape seems better for such functions.

Not all apps has support for split screen. Example of such app is the Default music app and Instagram app.

Only two apps can be used simultaneously on the split screen mode. Of course, you can close one and open another.

How To Deactivate Split Screen Multitasking Mode On Android

To deactivate, simply hold the divider line and drag either downwards or upwards.

So, that’s it guys. That’s basically how to activate and deactivate split screen mode on Android phones running Android 7.0 Nougat. This should work on the infinix note 3, Hot S, Hot S2, Hot 4, zero 4, smart and the Note 4. 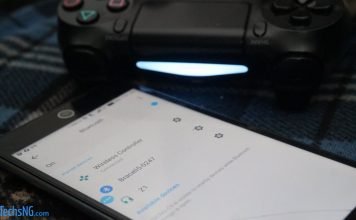