There are quite a handful of security apps on the PlayStore and the Security Master App is one of them. Security Master prides as the best antivirus software for android. How well does the app live up to the hype? We are about the find out.

Courtesy of the increasing number of virus and malware reports over the years, people deem it fit to protect their respective devices. And in doing so, they tend to install the ‘supposed’ best antivirus app they can find for their device.

Downloading and installing security master was as easy as installing every other app downloaded from the play store.

Size is just around 10MB. Hence, having to download and install the app will most likely not eat up space on your android device.

Launching the app and passing through the first few step up process is pretty quick too.

First Look At The Security Master App for Android

When connected to the internet, you can be sure of experiencing a couple ads. I understands ads are one of the ways to make money but, making it the first thing that displays after the start up screen, is a bit of a turn off. At least, to me.

The security master app will assume there is some possible problem(s) on your android device. Curious users like me will most likely be left with the option of having to tap the SCAN option. 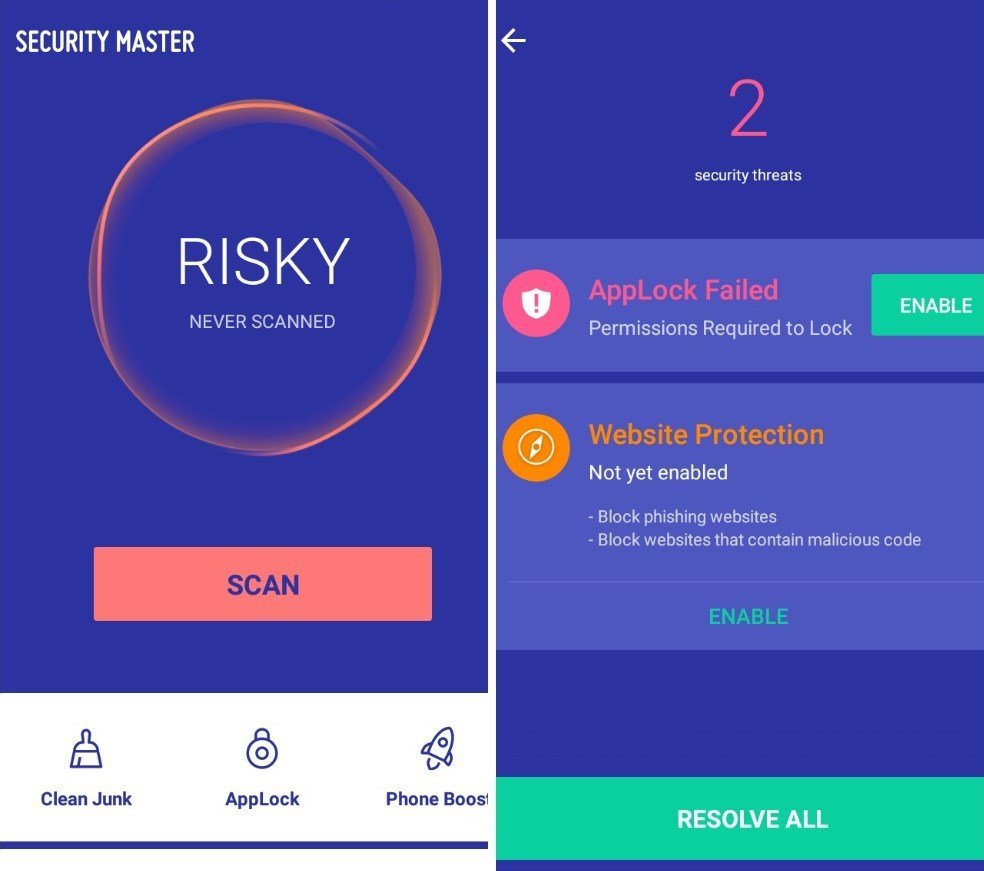 While these are more of suggestions rather than problems, do i necessarily need them? And if i don’t, how are they supposed to be problems or perhaps, why are they portrayed as problems by the app?

First, Android has it’s inbuilt security feature. Of course, the default android security typically unlocks the device and doesn’t necessarily allow for users to unlock apps, being able to lock apps are exclusive features that are sometimes, embedded in the device by OEM.

Check Out:  SignNow Review - Easily Fill, Add Text and Signatures To Forms On iPhone and iPad

Having to use an external app is totally not necessary and do i have to mention that getting rid of such passwords on android is very easy to accomplish by someone who knows how to.

Then there is the website protection problem. I get the drift but, most well sort after browsers often come with this same feature. Likes of Chrome and Firefox has some website security feature embedded in them. They often inform you of possible loopholes ahead. So, do i necessary need such extras? Obviously no. Thankfully, these problems can be ignored on the security master app.

Again, an ad will most likely be experience after choosing to ignore both suggestion / problems. Some of these ads are ads asking you to install apps like CM Locker.

CM locker is supposed to be a phone and app locking app. Gullible users may consider the app useful but i would advise you skip it by choosing the cancel option. After-all, the security master app claimed to have the same feature. So, why install another?

The app comes pretty loaded with a lot of other features. Other than the scan and applock features, there is the clean junk feature. There is also the CPU Cooler, Battery Saver, Notification Cleaner, Message Security, Safe browsing, SafeConnect VPN and the Game Boost.

How about we talk about some of these features one by one? I’ve talked about the scan and the app lock feature above already. Hence, we’d skip and talk about a few other features.

The Clean Junk is actually a feature on the app which allows the app to clean cache junk, residual junk files, ad junk and obsolete APK files. Tapping to allow, will display a prompt asking that you grant the app permission to access photos, media and files on your device. Of course, this prompt will only be displayed on android devices running Marshmallow OS and older.

In my case, the clean junk feature was able to discover 790MB worth of junk files to be cleaned.

That’s a lot of files and i am not sure i want to tap the clean until i am sure of the exact files. I did tap on the clean option and it claimed to have cleaned 790MB of junk files. Really cool, right? I am not sure why, but i seem to experience some thumbnails for movies on the phone not displaying after cleaning these supposed junks.

To be clear, you shouldn’t do this. You shouldn’t clean the junk files on your android device. Reason being that, games and apps often leave cache files on the device. These cache files makes it easy for the apps and games to not exactly have to start all over but pick up from where you left off (sometimes). For example, If you have been playing a game and you choose to use the clean junk feature, the game will literally start from the very beginning. Same applies to apps.

Except your phone is running down on storage and having to create more space on your phone at the expense of losing cache files, you should skip this.

The Battery saver feature is self explanatory, i believe. This typically displays your battery percentage and thereafter, scans your apps to decide if your battery is draining fast thus proffering solution of having to hibernate apps.

For every action successfully taken on the app, an AD is displayed. I’ve got to be honest, this can be really annoying. While the phone seem to have the battery saver on board, it’s funny how i get to experience battery draining faster than before after having the app on board.

Just in a bid to make the app feel good of itself, I’ll choose the clean option. That’s all good now.

The safeconnect VPN is a VPN that comes with the security master suite. Personally, this is the only feature on the app that i sorta appreciate. VPNs are often used in cloaking IPs. That way, websites and apps will not be able to detect your original IP. Instead, the VPN’s IP is what’s going to be displayed as the IP address.

Testing this out, it displays my IP as that of a France citizen. Not bad, if you ask me. But, one would have thought it’d be US or UK.  There is a daily usage limit of 200MB after which i am guessing you’d have to pay or wait till the following day. Not sure which. However, wouldn’t it be better to use unlimited free VPNs like OperaVPN with no limits?

With such daily limit and OperaVPN being very much in vogue, turns out the VPN service isn’t as handy as i thought.

At this point, i think i am pretty tired of talking about the app already. Will i be keeping it? Definitely not. This brings me to a question you may be asking yourself or may have asked yourself.

Check Out:  2 Best Apps To Compress Video Size On Android To Send Or Upload

Do You Really Need An Antivirus App On An Android Phone?

The simple truth is, No! Reason being that, Android out of the box, has some security measures in place. I understand that on computer, getting virus or malware could be as easy as using a vulnerable browser in accessing a a wrong website. But in the case of android, you are often prompt to install an app before it installs on your device.

By default, installation of apps from unknown sources are not allowed. Apps are allowed to be installed if they are downloaded directly from Google Play Store. To a very large extent, apps on the play-store are safe. The playstore even has it’s own virus/malware screening mechanize and in some cases, apps uploaded on play store, are manually verified by real humans if need be.

Of course, it’s often advised that you allow being able to allow installation of apps from unknown sources. However, you should be careful to know the kind of sites you choose thereafter, downloaded apps and games from. These sources should be trusted before choosing to install apps and games from.

I have been an android users for years now and I’ve never really experienced my android phone being effected with virus or malware. Guess what i am really trying to say is, if you keep a low profile and only download files from sites you trust or has good reputation, you are pretty much safe.

I am not saying majority of the antivirus apps on the playstore won’t help protect your phone against virus. All i am saying is, most of the time, these apps often do more harm than good. By that, they scan the apps you download for virus. This is essentially useful in a case whereby you download apps from external sources. However, these anti-virus / security apps, can sometimes affect your phone’s performance.

In the case of the Security Master app, the ads are quite much. I also did notice my battery drained faster than normal compared to when i didn’t have the app installed on the phone. More so, sometimes, there are notifications from the app that cannot be cleared from the notification tray and bar.

Again, if you are wondering whether or not to install the security master app, I’d say, Skip it. 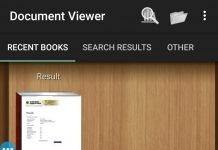 The Best Android App For Opening .oxps Files Without Conversion 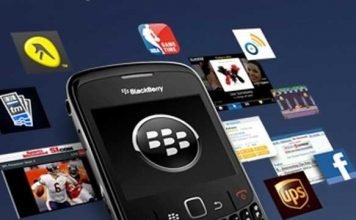 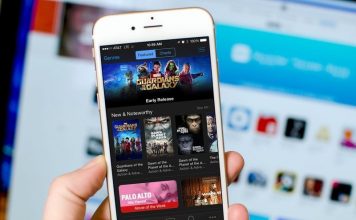